Black Alliance for Peace (2019-12-11). On International Human Rights Day, Oppose U.S. Coup in Bolivia and Global Lawlessness: Black Alliance for Peace (BAP). globalresearch.ca December 10, 2019, on this day 71 years ago the Universal Declaration of Human Rights (UDHR) was launched by the United Nations. The Declaration reflected the agreed-upon principles that were expected to usher in a new period in which this …

teleSUR (2019-12-11). Venezuela Charges 509 Human Rights Violators: Attorney General. telesurenglish.net The Venezuelan Attorney General, Tarek William Saab, said Tuesday that since the start of this administration, the Public Ministry (MP) has charged 509 alleged human rights violaters in the Bolivarian Republic. | RELATED: | 'OAS Is Major Human Rights Violator Against Venezuela' Dussan | "770 have been charged for crimes such as homicide, torture, inhuman or degrading treatment, illegitimate deprivation of liberty, and domicile violations among others. Of that total, 131 conviction…

Alan MacLeod (2019-12-09). 'Sexy tricks': How journalists demonize Venezuela's socialist government, in their own words. thegrayzone.com Journalists revealed to me the tactics they use to sell stories painting Venezuela as a socialist dystopia. One described himself…

Paul Dobson (2019-12-09). Venezuela's Civilian Militia Surpasses Target, Reaches 3.3 Million Members. venezuelanalysis.com The body is due to be legally incorporated into the Armed Forces as a "combat unit." 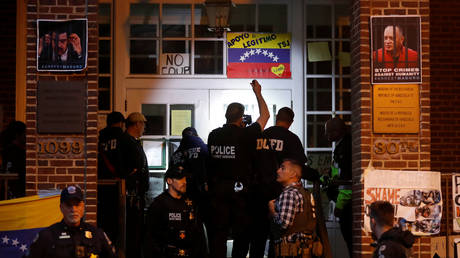 Journalist Max Blumenthal says assault charges against him have been dropped by the US government partially because the case would have turned into a great embarrassment for the Secret Service. | Blumenthal was subjected to an early morning arrest in October on a five-month-old warrant, which stemmed from an accusation against him and fellow activist Ben Rubinstein. A Venezuelan opposition activist said they attacked her when they were delivering food to people who took cover in the Venezuelan Embassy in Washington DC trying to prevent supporters of US-backed self-proclaimed president Juan Guaido from taking o…

Ricardo Vaz (2019-12-04). Red Cross Chief: Venezuela Aid Being Politicized to 'Destabilize the Country'. venezuelanalysis.com Francesco Rocca slammed the underfunding of aid programs as a problem of "political will."

Paul Dobson (2019-12-02). Venezuela's PDVSA Secures Temporary Lease Extension for Curacao Refinery. venezuelanalysis.com Despite the extension, refinery owners are looking to end the 34-year cooperation under pressure from US sanctions.

Ryan Cristián (2019-11-18). US Says Israeli Settlements Are Legal, 23 Killed In Bolivia As Violent Coup Ignored & Venezuela Flop. thelastamericanvagabond.com Welcome to The Daily Wrap Up, a concise show dedicated to bringing you the most relevant independent news, as we see it, from the last 24 hours (11/18/19). As always, take the information discussed in the video below and research it for yourself, and come to your own conclusions. Anyone telling you what the truth …

Paul Dobson (2019-10-28). Venezuela Applauds Regional Leftist Victories. venezuelanalysis.com Caracas rejoiced at the "defeat of the IMF" in elections in Argentina, Uruguay, and swathes of Colombia this Sunday.

Ricardo Vaz (2019-10-17). Venezuela Elected to UN Human Rights Council. venezuelanalysis.com The Maduro government was elected to a three-year term with backing of 105 out of 195 UN member-states.

For a nationwide general strike to halt the drive to reopen schools!