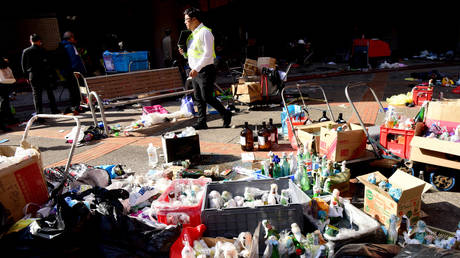 Hong Kong police have completed searches at the Polytechnic University, removing a disturbingly vast arsenal of urban warfare weapons, including firebombs and hazardous liquids, from the recently besieged campus. | Police officers from explosive ordnance teams have secured hundreds of petrol bombs, cans of gas and buckets of chemicals after they cleared the Polytechnic University (PolyU) early on Friday. | The find adds to 3,800 petrol bombs, 921 gas canisters and 588 chemicals, including acid and other corrosive liquids, recovered the previous day, local media report. | Police have also found over 40 damaged…

Joshua Cho (2019-11-28). Media wonder: Why can't Venezuela be more like Bolivia? mronline.org Western corporate media outlets have often cried foul when foreign elections don't go the way the U.S. empire wants them to, and find roundabout ways to label the violent attempts by vocal right-wing minorities to use military forces to overthrow leftist governments as "protests" rather than coups (FAIR.org, 5/16/18, 5/1/19). | Source

Staff (2019-11-27). We Can't Afford to Banish Politics From the Thanksgiving Table. truthout.org I've got no more patience for pundits and their annual calls to not discuss politics at the Thanksgiving table. Take USA Today's self-described "civility expert" Steve Petrow, who just gave the nation a comical list of nine ways to avoid "political food fights." Rule number 7 reads: "No baseball caps at the table…. Especially if they say 'Make America Great Again' or…

David Armiak (2019-11-26). Wisconsin's Democratic Governor Signs Anti-Protest Bill into Law. progressive.org Peaceful protestors can now be charged with a felony if they trespass on property owned, leased, or operated by companies engaged in the distribution of oil or petroleum.

Michael K. Smith (2019-11-26). Legalienate Hails Democratic Coup In Bolivia. dissidentvoice.org Legalienate editors Frank Scott and Michael Smith, who declared themselves co-president of the United States in February, today hailed the self-proclaimed presidency of Jeanine Añez in Bolivia as a harbinger of democratic self-determination throughout the world. "Juan Guaidó in Venezuela was just the beginning," exulted Smith. "On the eve of Thanksgiving, we are deeply grateful …

Western corporate media outlets have often cried foul when foreign elections don't go the way the US empire wants them to, and find roundabout ways to label the violent attempts by vocal right-wing minorities to use military forces to overthrow leftist governments as "protests" rather than coups (FAIR.org, 5/16/18, 5/1/19). But it's still rare to see them blatantly call for a right-wing coup without a hint of…

Fight Back (2019-11-19). FRSO leader speaks in Texas on Venezuela's Bolivarian revolution. fightbacknews.org Arlington, TX — On November 13, the University of Texas at Arlington Progressive Student Union (PSU) hosted a national leader of Freedom Road Socialist Organization, Tom Burke, who gave an eyewitness report on Venezuela and the Bolivarian revolution. | Cassandra Swartz, with the Dallas Anti-War Committee, opened the event by talking about how anti-war activism is more necessary than ever, due to the horrific military coup in Bolivia against indigenous President Evo Morales. | Burke went in depth about his experiences in Venezuela to a crowd of 25 people. Burke dispelled myths about Venezuelan shortages, tal…

Ryan Cristián (2019-11-18). US Says Israeli Settlements Are Legal, 23 Killed In Bolivia As Violent Coup Ignored & Venezuela Flop. thelastamericanvagabond.com Welcome to The Daily Wrap Up, a concise show dedicated to bringing you the most relevant independent news, as we see it, from the last 24 hours (11/18/19). As always, take the information discussed in the video below and research it for yourself, and come to your own conclusions. Anyone telling you what the truth …

Paul Dobson (2019-10-28). Venezuela Applauds Regional Leftist Victories. venezuelanalysis.com Caracas rejoiced at the "defeat of the IMF" in elections in Argentina, Uruguay, and swathes of Colombia this Sunday.

Ricardo Vaz (2019-10-17). Venezuela Elected to UN Human Rights Council. venezuelanalysis.com The Maduro government was elected to a three-year term with backing of 105 out of 195 UN member-states.

Paul Dobson (2019-09-30). Wave of Xenophobia Against Venezuelans in Peru Sparks Diplomatic Spat. venezuelanalysis.com The brutal beating of a young Venezuelan girl by Peru's police and a nationalist march have sparked outrage.